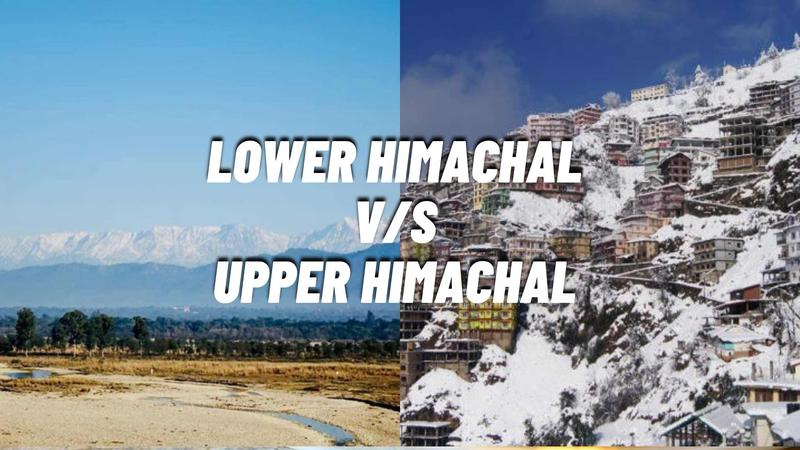 Lower Himachal is a large geographical region bounded by the Shivalik Hills, the Dhauladhar Foothills, the plains of Punjab, Haryana, and some parts of Lower Uttarakhand, well as a slight stretch of Uttar Pradesh’s Saharanpur District and JK ( UT). Upper Himachal is the remainder of the region, bounded by JK, Ladakh, Tibet ( China), and Uttarakhand.

Lower Himachal is situated at a lower altitude area ranging from 320 to 1500 meters above sea level and comprises the Outer Himalayan Shivalik Hills, Dhauladhar Foothills, Western Kangra, Southern Solan, Sirmour Plains, and the Districts of Hamirpur and Bilaspur. These areas are often covered with brown hill soils, sub-mountain soils, and red loamy soils.

Upper Himachal is a vast geographical area bounded by the Greater and Lesser Himalayas. It comprises the districts of Chamba, Lahaul & Spiti, Kinnaur, Kullu, Mandi, Shimla, Upper Solan, Upper Kangra, and Upper Sirmour. Kullu, Baspa, Spiti, and Pangi have some of the most varied terrains and high-altitude mountains and valleys in the area. Upper Himachal is often located between the elevations of 750–7000 meters. These usually have soil types such as mountain meadow, rocky soil, and desert soil.

Lower Himachal residents speak a dialect of Pahadi with a Punjabi influence but a vast vocabulary of their own. Although Pahari may be written in Devanagari or Terki Script, it is not utilized in practice. Rather than that, people place a premium on the use of Hindi or Punjabi (in the Border Plains ) in everyday conversation. It is highly possible that a sizable proportion of persons born after 1950 are bilingual in English and Hindi. In actuality, every 10–20 kilometers, the local dialect varies somewhat in terms of a few of its words and how people pronounce them.

Upper Himachal has a vast number of dialect subgroups, including Mandiali, Kullvi, and Kinnauri, which are entirely indigenous and have no resemblance to the dialect spoken in Shimla and Sirmour. Similarly, the local dialects of Lahaul Spiti and Chamba are diametrically unlike in every way. Several areas of the Lower Chamba district are home to thousands of Kangri Pahari speakers. Additionally, several dialects of Dogri, Tibetan, and Tribal languages are spoken by various sects. Due to Kasol – Mini Israel, only a few people in Parbati Valley may comprehend Hebrew. The Upper Region’s culture is mainly oriented on indigenous deities and untouchability in very backward villages.

People, particularly ladies, dress in traditional attire that varies by area and includes various draperies and jewelry. Men wear round hats, jackets, and blazers. People in Lahaul Spitti wear Cholu, a traditional attire comprised of a long skirt, a few trinkets, and a woolen shawl.