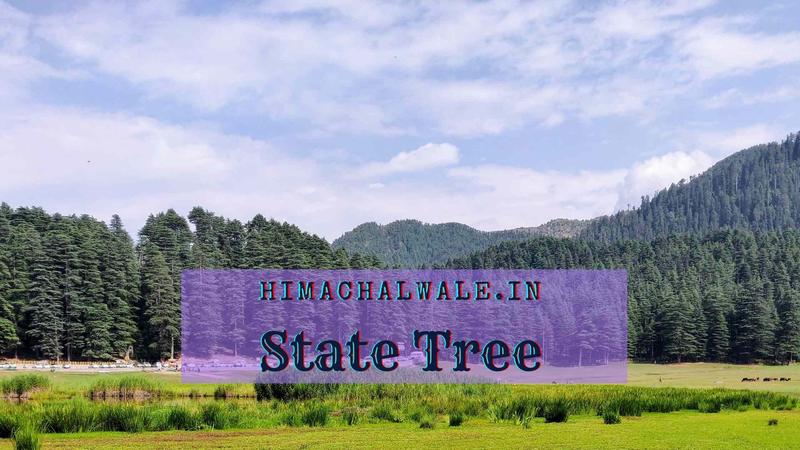 The etymology of State Tree of Himachal Pradesh

The specific epithet ‘deodara’ is derived from Sanskrit ‘devadaru’, refers to ‘tree of the gods’ or ‘timber-of-the-gods’; another opinion suggests that the word ‘Deodar’ is derived from a historical Indian state.

Male and female strobili often grow on separate trees, but sometimes on the same tree but in separate branches. Cones are barrel-shaped, 8 – 13 × 5.5 – 8 cm, erect with numerous fan-shaped scales; seeds are triangular with a broad wing.

This species is native to No Range of Distribution: rthwestern Himalayas, distributed from Kashmir to Garhwal at altitude ranges from 1210 to 3050 m and is the most important conifer between 1520 and 2440 m. It is also found in eastern Afghanistan, northern Pakistan, southernmost Tibet and western Nepal.

It is the strongest Indian con Economic Importance: iferous wood owing to its antifungal, insect-repellent and anti-bacterial properties. It is used as valuable construction material.

The aromatic oil, extracted from Traditional Uses: cedar wood is used in alleviating
tension, fear and anger, in reconnecting to spiritual awareness and in balancing mental instability since long.

In Kangra, the wood is ground with water and the paste is applied to relieve headache. Since very early time, because of its lofty, awe-inspiring height, deodar is considered as the abode of gods.

In Western Himalayas, particularly in Kumaon Hills and Kullu Valley, people considered the tree sacred and offer iron pieces as their offering to the Gods dwelling in the trees.

In Yunani, the wood is used as diuretic, carminative, expectorant, useful in alleviating piles, rheumatism, palsy, epilepsy, stones in the kidney and bladder and prolapsus recti. The bark is astringent and useful for fevers, diarrhoea and dysentery.

The oleoresin of deodar and the dark-coloured oil extracted from the wood are valued as an application for ulcers and skin diseases. They are also useful in curing of sore-feet of cattle.

Note: The plant regenerates naturally in groups or masses of more or less even age in the neighbourhood of seed-bearing plants. Deodar plantations may be raised artificially by direct sowing or by direct transplanting seedlings from a nursery or forest. Although the species can successfully be raised from cuttings but this method has not been in common practice in India.