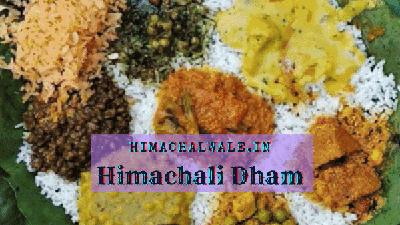 The state’s climate and geography heavily influence Himachal Pradesh’s cuisine. But as we talk about general dishes, then let us tell you that are “Rajma’s Madra”, “Channa Khatta” and “Meethe Chawal” are very famous.

The specialty of Himachali Dham lies in the right mix of spices, and also their special utensils in which the food is cooked. Dham speaks for lunch. Lunch around noon starts at 12 pm in the evening and continues until 4 pm.

The traditional Dham is much appreciated. The Dham provides a chance to get familiar with the state’s diverse delicacies.

READ MORE: WHY HIMACHAL IS THE BEST STATE TO LIVE

Recipe for cooking in Himachali Dham:

Himachal Pradesh food recipes of Himachali Dham is prepared only by botis (a particular caste of Brahmins who are hereditary chefs). The night before, preparations for this spectacular mid-day dinner begin. The tools used to prepare the cuisine are often brass and are referred to locally as “Batohi,” “Baltohi,” or “Charoti.” It is served in courses to those seated on the floor. The dish is served on pattal or pattlu leaf plates ( in the local Himachal Kangra language). The Dham consists of simple, fragrant rice, fried pulses or dal, spicy vegetable curry made with red kidney beans, and various sweets. Dham is the famous food of Himachal Pradesh.

The main attractions of our Kangri Dham are Mah (black lentils), Madra (a chickpea preparation), Mahni (sour gravy), and Meetha (sweet gravy). First,  plain rice and green chilies are given. This is soon followed by rajma, Matar paneer, urad, or lentils of the month.  Chole comes after all in lentils,  which have a surprisingly sour taste.

The star dish for me is “Khajoor ki Kadhi”, which is cooked with dried dates. The taste of date curry is enhanced by roasted walnuts.

Another interesting dish is “Sepu Vadi”, where small dumplings made of white lentils are boiled in water, deep-fried in mustard oil, and cooked in spinach gravy.

And at the end of all sweet rice is served – to which ghee, saffron, and dry fruits are poured in abundance. In some cases, red or yellow colorants are also used in food. It is also known as “Meetha Bhaat“. Which is the famous food of Himachal Pradesh.

Read More: Do you Know about Himachali Topi?

In each district, the Himachali Dham is prepared differently. Let’s have a look at Chambyali Dham, Kangri Dham, Mandyali Dham & Bilaspuri Dham.

Chamba is believed to be the dham’s birthplace. Auriyali dal is served first, followed by Rajmah Madra. The sweet dish comes next, followed by Teliya Maah and Chamba kadhi. The main boti serves the main dish Rajmah Madra. Chambyali Dham also is serves an exceptional dish called kadhi, which is created from a native mushroom. In the local dialect, this mushroom is referred to as guchi.

It is reported that in ancient times, people began eating only after the principal boti arrived and shouted ‘Jai Maharaj’ loudly to the people seated in the paint, to which they all responded by chanting the same words. According to folklore, the madra is a gift from Chamba that was brought to Kangra by the Chambyali girls who married in Kangra.

Curd is used to making the gravies for Kangri Dham. This is because they aid in the rapid digestion of fatty and heavy foods. The dish is nutrient-dense because to the use of ghee, khoya, and curd. The Kangri Dham begins with chickpea or moong dal madra. Following that, mash dal is served. This particular dal is prepared by combining three different varieties of dals: moong, urad, and masoor. The dhuuni process is used to make maash dal. Following that, khatta is served. This dish not only aids in the digestion of the heavy madra fats in the stomach but also cleans the ghee on the finger tips. The kangri Dham concludes with the recitation of meetha bhath ( sweet rice). Dham is offered in this district in a Vedic fashion to ease digestion. Its unique color and flavor are achieved with the use of powdered burnt and crushed whole walnuts.

This Dham (Mandyali Dham) is offered in accordance with the sage Sushruta’s ultimate rule for thoughtful and healthy eating. He suggests beginning the meal with a sweet dish in his Sushruta Samhita. Following that, a salty food item should be served, and the meal should conclude with a khatta. As a result, the Mandyali Dham begins with a sweet dish, which is typically boondi meeta. Following that comes its world-famous sepu vadi. Sepu Vadi is a district-specific preparation. Then pumpkin and kolth (little red lentils) khattas are provided. Following that, black lentils cooked in ghee are served. To conclude, Jhol is served in a glass. This is produced by diluting the curd with water in a clay pot.

This Dham (Bilaspuri Dham) has Dhotuwa dal as its specialty.

This particular dal and the kadhi pakora are the two signature dishes of this Dham. The sweet dish is offered at the end of the Bilaspuri Dham.

The preparation of traditional food of Himachal Pradesh (Himachali Dham): 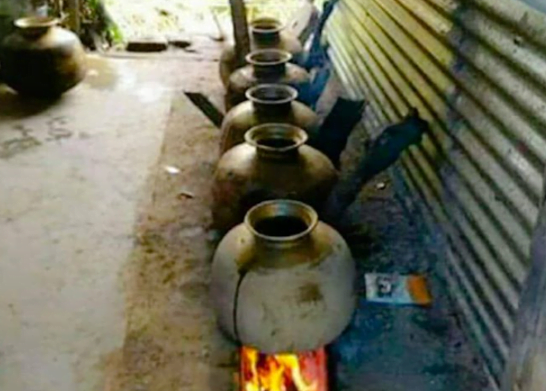 To get the mouth-watering taste of Himachali Dham, preparations begin a day before the dish is to be served.

Historically, a Dham was a celebration commemorating the agrarian civilization. Each home contributed milk, buttermilk, and seasonal vegetables such as pumpkin to the Dham. Not only did they aid with the culinary goods; they also assisted the boties with cutting and slicing. As a result, Dham evolved into a celebration of community.

The boties dig a trench in the dirt on the day of the Dham. It is then refilled with previously dried firewood. Samdha is the old technical term for this type of firewood. The dish is prepared in enormous round copper pans known as charoties or baltoies. In particular, the iron vessel is used to cook khatta.

Nutrition and Science in Himachali Dham:

Himachali Dham is nutrient-dense and is considered a full diet in Ayurveda. The Chambyali Dham, Kangri Dham, Mandyali Dham, and Bilaspuri Dham are all made without onion, tomatoes, or even garlic. The gravies are made by combining curd, khoya, and spices that vary by district. The dhuuni process is used to create kangri Dham. It has a few bits of burning coal contained in a bowl placed between the dish filled with meals. Then mustard oil is poured over it and the vessel containing the food is covered with a lid. It imparts a rare and alluring aroma to the dish.

A methodical approach to serving the Himachali Dham: 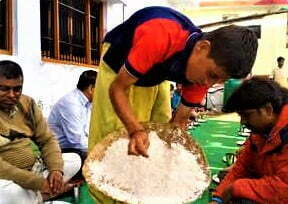 In each district, the Himachali Dham is prepared differently. It is served in quantified amounts by professional bodies. Auriyali moong dal is served first in Chamba, followed by the sweet dish. It is concluded with a khatta.

While in Mandi (Mandyali Dham), the meal begins with sweets and ends with kadhi.

Kadhi is used as an astringent food to aid digestion, as well as to maintain a healthy mind and body.

Nowadays, people prefer to sit on a table and chair and eat Dham with a spoon. This has increased food waste at functions and diluted the dham’s advantages. However, it remains steadfast in its convictions. The state government maintains a large number of tourism establishments that serve dham. Additionally, private restaurants are well-known.

The advantage of dining traditional food of Himachal Pradesh (Himachali Dham) on the floor:

Individuals cross their legs and sit on the ground. This is the only way to eat food that has been scientifically confirmed to be the optimal way. While a person sits and eats, it aids in the digestion of the meal. Sukhaasan strengthens and stretches the body. Additionally, it aids in digestion, which aids in weight control. It not only calms the mind and nerves but also promotes blood circulation and strengthens the heart. This is a quick way to maintain healthy knees and hip joints while also improving your body posture.

Perks of eating Himachali Dham with our hand:

Eating with our hands increases health. This is because of the beneficial bacteria called flora that live on our fingers. It promotes digestion. Additionally, when the figure tips make contact with food, the mind prepares to digest the spices and texture of the meal being mixed by the fingertips.

It is a time-tested method for restraining overeating and maintaining fitness. As it is claimed, eating with our hands teaches us to eat consciously. According to the Vedas, our figure points correspond to our body’s seven chakras. Thus, massaging the fingertips while eating with our hands benefits us in every manner conceivable.

Additionally, it is believed that eating with your hands helps avoid type two diabetes. This has a straightforward association. Because we eat with our hands, we eat slowly. Eating quickly is associated with blood sugar abnormalities in the body. When you eat slowly and carefully, your digestion improves, and as a result, your blood sugar level balances out.

Dham is an age-old celebration that has retained its credibility. It is consistent with research and promotes health. In Himachal Pradesh, any celebration is honored by finger-licking food eaten with family and friends. The Dham is the meal provided during parties, occasions, and festivities. As it is a traditional food of Himachal Pradesh. According to mythology, the notion of Himachali Dham originated in Himachal’s Chamba district. The monarch of Chamba was reputed to be an avid foodie. He had a particular fondness for Kashmiri cuisine.

To appease his palate, he directed his chef to produce a dish resembling Kashmiri cuisine. Without onion or tomatoes, the chef made the dish in ghee and curd. Because Chamba had an abundance of Rajma, it was chosen as the dish’s primary ingredient. Rajma Madra was cooked by the obedient and efficient chef using only local ingredients.

The remainder is history. The king rewarded him for his preparations. Rajma Madra is the Chambyali dham’s garnish. It is famous around the world.

Additionally, it is thought that Dham is the stawick meal that was prepared as Prasad in temples and then handed to the public. It is a traditional food of Himachal Pradesh.

Satwick food is a non-stimulating meal that helps to quiet the mind and replenishes the body with energy.